Calf poop (You might want to skip this entry)

When I buy baby calves, I have to go on what I call "poop patrol" several times daily, checking the quality of their poop.  When I used to raise calves in individual hutches, it was somewhat easier, because with only one calf in each pen, there was no doubt as to which one had "scours".
Now I keep two or three together in a pen.  So when I notice a puddle of runny poop, I have to figure out which calf did it.  Sometimes I'm lucky enough to actually see the calf in action, which removes all doubt.  Other times, I can tell by looking at the calf's back end for nasty hind-quarters and tail.  If I have any doubt at all, every calf in the pen gets a pill.

When you buy bottle calves, they usually do get scours at some point.  You have removed them from a place where they picked up their mom's immunities and brought them onto a property with a whole new set of germs that your own cattle are immune to.  You can almost bet on new bottle calves getting scours within the first week or two, and you can't just ignore scours:  It can kill.

Because I only buy calves from people who sell nothing but healthy babies, the biggest cause of scours around here is the calf getting too much milk.  I bought the current crop of calves to milk my cows for me, and they do a great job of that.  However, before they can get used to so much rich milk, they usually have some diarrhea, and I get to treat the problem.

Initially, I give them a pill I get from the vet morning and night.  Many times the pill does the job and I am done.  However, if the pills don't fix them, I give them an electrolyte solution and sometimes even take them off the cow until they're OK.  Of course, that means I have to milk the cow. 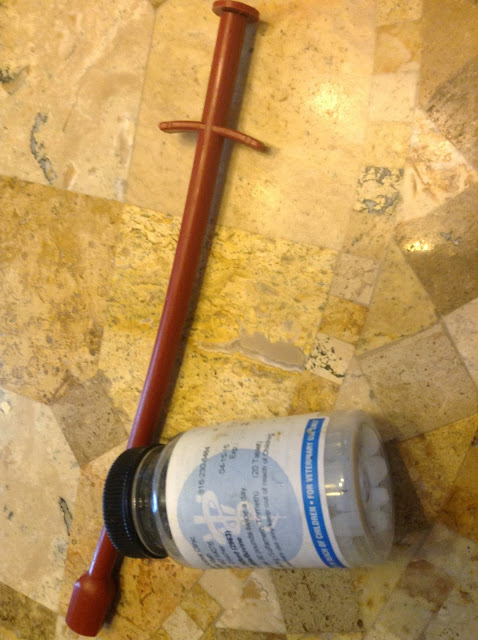 Here you see the pills and a "balling gun".  You place a pill in the end of the gun, stick the end with the pill in it down the calf's throat, and push on the other end.  This gets the pill past the point of no return, so the calf can't spit it out.  Now, this was a cinch when I was younger.  I'd corner the calf, straddle his neck facing forward, and do the job.  Picture a 70-year-old woman with bad knees doing this and you will realize it isn't so simple now.  This morning I dosed the wildest calf after he started nursing, because otherwise I couldn't catch him.

I had to dose the calves because here's what I found on poop patrol: 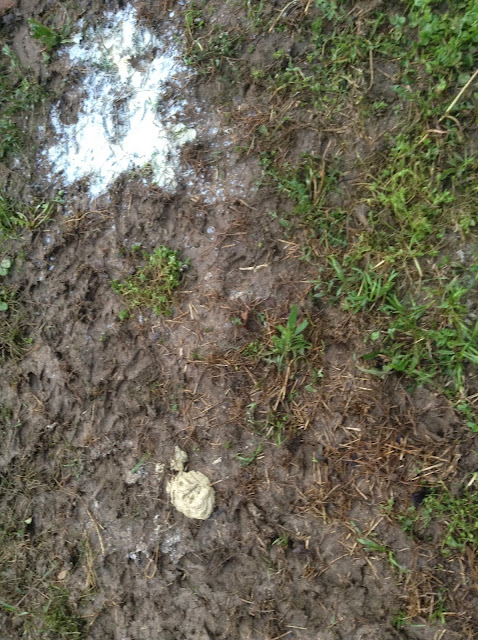 What you see here is one sample of healthy poop, at the bottom of the picture, and a sample of diarrhea poop at the top.  After seeing this, I checked all three calves.  Two of them had messy tails.  I decided to give all three of them a pill, just for good luck.  The good news is that it's only "milk scours".  I know this because of the color.  So if worse comes to worse, they'll get pulled off the cow and given electrolytes (pedialyte for calves) and I will end up with 2 1/2 gallons of milk tonight.  And then I'll make butter tomorrow!

I apologize to all the mothers reading this.  I'm sure the last thing you wanted to see this morning was a picture of poop, especially runny poop.
Posted by Donna. W at 7:35 AM

Very interesting information - - if not exactly appetizing. I have enough trouble cleaning the litter boxes of three cats.

I hope your Mother's Day is pleasant and poop-free (sorry, I couldn't resist).

Pictures like those no longer bother me. After having 7 children of my own and soon to be 22 grandchildren, I've changed a lot of diapers in my time. I hope you have a happy Mothers Day !

Since I don't have cows(or know much about them), this was interesting to me. I wouldn't want to have to deal with it though!

Ha ha. Yeah, I do poop patrol too. Though we do keep our calves in individual hutches for about 3 weeks, still sometimes they will hold off on the scours until AFTER they are in a common pen with others. Then I do the tail inspections...etc. We use a milk-replacer powder that we mix with the milk. I don't know if I could to the pill down the throat method myself.

The only calf we ever raised came down with scours. This was back in the 1980's. My step father told us what to do (some home remedy) and we did it and the calf got over it. We can't for the life of us remember what the remedy was!

Poop patrol is messy that's for sure. Hope you had a Happy Mother's Day. (after you took off your boots)

That bucket was exactly like what we had! The calves would butt the bucket and I can remember them knocking the bucket into the nasty pen! We sold milk so I guess that is why we bought powdered formula. It was a lot of work. Because dad had his nervous breakdown when we had the dairy....I think that is why I don't like cows. This happened in 1960, dad was committed to a veterans home. I was 10 qnd fleta 12, we ran the dairy for a month by ourselves. We had to put milk in cream cans and in a big milk cooler. We would get one on each side of can and heave on three count but it would take several times before we could get the can in the cooler.